The Gospel of Thomas is one of the non-cannonical texts found near Nag Hammadi in 1945. It’s a “sayings Gospel” which means there is no narrative story, just a collection of sayings. The Gospel starts with the pronouncement that these are “hidden sayings of Jesus”. The collection is fascinating and there are several sayings that resonate/provoke me as a transgender man.

Gospel of Thomas [37]: His disciples say to him: “On what day wilt thou appear to us, and what day shall we see thee?” Jesus says: “When you strip yourselves without being ashamed, when you take off your clothes and lay them at your feet like little children and trample on them! Then [you will become] children of Him who is living, and you will have no more fear.”

I grew up entrenched in purity culture which places a huge emphasis on modesty (especially for women).

I spent a lot of time reading and learning the Bible, especially the letters attributed to Paul. I read about how our flesh was sinful and something to be fought with. I read about Paul’s longing to be spirit.

I learned a lot about bodies and how troublesome they were. Especially female bodies. Especially (though I didn’t know this word at the time) queer bodies. I internalized all of these messages and they, coupled with the discomfort I felt, told me a lot about my body.

I used to fear being raptured because it meant being taken to heaven naked. I didn’t want to go on a mission trip because I knew that I would be forced to shower with other people (and that those who were uncomfortable with that were mocked and told to get over it).

When I first read this verse from the Gospel of Thomas it made me shudder a bit. “When you strip yourselves without being ashamed, when you take off your clothes and lay them at your feet like little children and trample on them!” I can picture what the writer is talking about; the little kid who strips naked and runs through the sprinklers (or the living room). The child who can’t seem to keep a diaper on. The little one who simply delights in their body as something good and holy.

Let’s face it; stripping naked and dancing in the street isn’t high on my bucket list. (Hell, it’s not on the list at all.) So what do I do with a verse like this?

I try to rationalize it: I say, well, he doesn’t really mean that we have to be naked in the street. It’s like those passages about money; we don’t really have to give it all away, we just have to be willing to do it. Maybe it’s the same here: I just have to say that I am willing. But that answer leaves me just as cold as does the rationalization about money. Besides, if I’m being honest, I’m not even sure I would be willing (with money or public nudity).

What does it even mean? What good would that kind of nakedness do? But then I begin to think about what I means to be vulnerable.

I am rarely vulnerable with my body. I stand with my arms crossed. I rarely initiate hugs. I keep myself closed off. I have learned that to be queer makes your physical affection suspect and so I don’t reach out. I have learned that people see me as a threat and so I hold myself apart. I was taught that my affection was unwanted and unwelcome and so I no longer offer it.

Then there are my insecurities: There are the scars on my chest that I am okay with in private but that I fear will invite questions if I am out in public. It’s been almost six years since my chest surgery and I have yet to go shirtless outside or in the presence of friends. I think about the scarring I have from acne (first puberty was awful, second puberty was a million times worse). I think of the parts of my body that no one has seen since I split up with my ex. I worry about my body; about being in an accident and having someone mistreat me because my body doesn’t look the way they think it should. It seems that I am still fighting with my body (or really with other people’s perceptions of my body). And I don’t really know what to do with that.

This is not a conversation about sex (though of course our sexuality is, for many of us, part of the conversation surrounding our bodies). Instead this is a broader conversation about bodies; skin and sinew and muscle. The shape of shoulders and thighs. The way we move alone and together.

For those of us who grew up in purity culture we struggle to unlearn what we’ve been taught. For those of us who are queer or trans there are further layers of shame that feel almost built in to the layers of our skin. We hold and carry our shame with us, often silently.

When I read the Gospel of Thomas I ask:

How can I embrace my body? How can I love my own flesh? How can I be vulnerable with other people? What does it mean to trust someone with my body? What do I still need to unlearn?

What will it take to dance naked and be unashamed?

PrevPreviousIs your sex life out of whack because of COVID? Read this.
NextI talked about Leviticus for 3 hours with a Baptist preacher, this is what I learnedNext 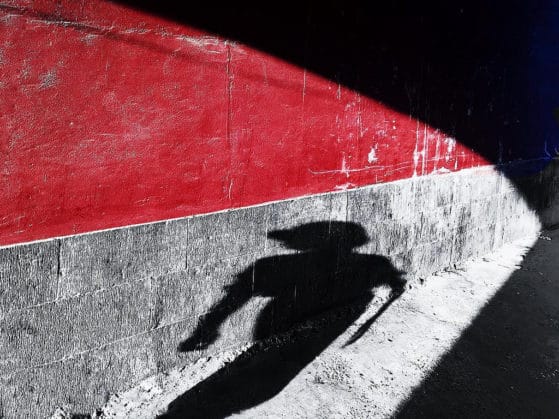 “My church isn’t affirming.” “My dad won’t use the right pronouns for me.” “My pastor keeps preaching anti-gay sermons on