I talked about Leviticus for 3 hours with a Baptist preacher, this is what I learned 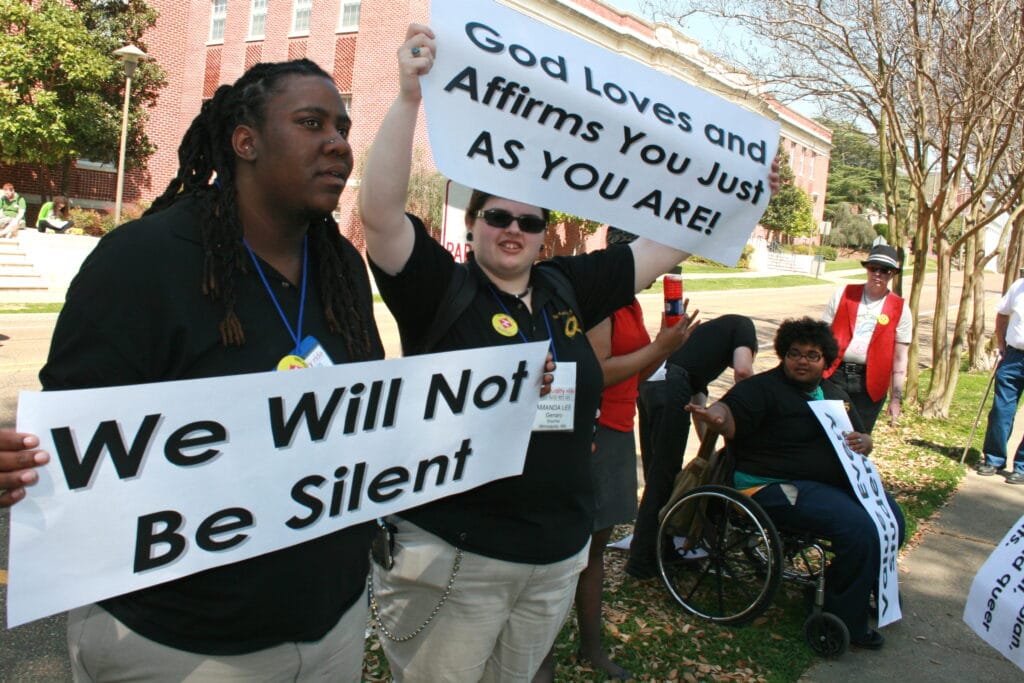 I talked about Leviticus for 3 hours with a Southern Baptist preacher. It was a sunny spring day and this charming young preacher sat across from me on a wooden picnic bench as we went back and forth discussing the ins and outs of Leviticus.

Who was Leviticus written for? What parts, if any, still applied to us as modern Christians? What was the original Hebrew for Leviticus 18 and did it apply to gay people?

We talked about other prohibitions in Leviticus — from mixed fabrics to menstruation. At one point, he offered that maybe meat eating was a result of the fall that he really shouldn’t eat meat. That even though it was “allowed” because of Peter’s vision, maybe it “wasn’t God’s best intention” … but then, he brushed it off (of course he did).

In 2008, I was working for Soulforce — an organization dedicated to ending Christian supremacy — and we were visiting Southeastern Baptist Theological Seminary as part of the Equality Ride. It was one of thousands of conversations I’ve had with anti-LGBTQ Christians across the country since I first got involved with activism in 2007.

When you argue about the clobber passages, it always goes about the same.

That day in 2008, I resolved to never debate Leviticus again.

I knew better already, but I’d forgotten. The year before, I spoke at Seattle Pacific University (which at the time prohibited queer relationships).

And oh boy! We found that queerness has a whole lot to say about it.

Our presentation at Seattle Pacific University was standing-room only. During the Q&A that followed, we didn’t get any of the questions you might expect from a pro-queer presentation to anti-queer audience — no “what about this?” or “you didn’t mention that” or “but don’t’ you think.” Instead, we got “I’d never thought of it that way.” “Can you tell me more about how you saw your boyfriend reflected in Eden?” “How can we better support the LGBTQ students who go here?” I could tell by the administrators’ faces that this was not the reaction they were expecting. And then something magical happened: as our presentation came to its official end, we received a standing ovation from nearly all of the students.

As part of our visit, a small group of LGBTQ students came out and started the school’s first (unofficial) queer student alliance. Today, SPU has a page on its website dedicated to scholarships for LGBTQ students.

I’m sure you’ve had more than a handful of conversations about LGBTQ “issues” — about your own humanity — that left you feeling drained and discouraged.

You might think that you NEED to have these conversations, in order to help your family, your friends, or your church move along. You love and care about the people in your life and you don’t want to leave them behind.

Or maybe you’ve even been given resources, advice, or training by LGBTQ affirming people or organizations about how to have these conversations “better:” how to stay in unaffirming churches, how to talk about “the clobber passages,” information about translations and additions and misinterpretations.

There are people who make a living telling you how to debate your humanity, conferences and movies that revolve around “educating” and “equipping” you to have these conversations.

How’s that going for you? What do you feel?

Jesus lays out a different approach in two of the Gospels. Mark 6:7-13 and Luke 10:1-11 tell the same basic story of Jesus sending out disciples.

He called for the Twelve and sent them out in pairs. He gave them authority over unclean spirits. He instructed them to take nothing for the journey except a walking stick—no bread, no bags, and no money in their belts. He told them to wear sandals but not to put on two shirts. He said, “Whatever house you enter, remain there until you leave that place. If a place doesn’t welcome you or listen to you, as you leave, shake the dust off your feet as a witness against them.” So they went out and proclaimed that people should change their hearts and lives.

Three things stand out to me in this story:

First, Jesus couldn’t do it alone, he enlisted the help of a team

No movement — not Christianity, not LGBTQ equality, not anything — can hinge on one person, no matter how charismatic a leader. We need each other to build a collective movement for justice; even Jesus realized that. Without a team willing to go out into the world, city to city, door to door, conversation to conversation, the Gospel message would never have spread, the movement would have dried up.

Second, the disciples are told to move on and not engage with people who won’t listen to their message

When anti-LGBTQ Christians send us harassing messages by email or social media, if we fail to engage with them, they often respond to us with some variation of “Not up for debate I see?” or “Progressive Christians aren’t so tolerant after all!”

That message is designed to take advantage of our best instincts, to prey upon our belief in human goodness and the infinite grace of God. But we can believe in someone’s goodness without wasting our time in a fruitless conversation with him.

In this passage, Jesus recognizes that time is limited and precious. The disciples can only visit so many towns, political canvassers can only knock on so many doors, you only have time in your day (your week, your year, your life) for so many conversations.

Do not let someone set against your humanity steal your precious time and energy from you. When it becomes clear that someone does not truly have ears to hear, Jesus is clear: shake the dust off your feet and move on. There is a whole world out there who needs to hear your message.

Third, the message is a call to change action as well as belief

Belief is not enough. It’s not enough to say “I think it’s OK to be LGBTQ.” Ok, cool. So what? What does that belief lead you to?

This passage ends with the disciples inviting people to “change their hearts and lives.” When your heart changes, your life needs to change as a result.

It’s easy to get stuck discussing theological ideas: sin, grace, repentance, salvation. “I love LGBTQ people” is an easy enough thing to say (or, it should be; unfortunately, it isn’t always). So instead of arguing endlessly about what Leviticus means or about this or that translation, I’m now more concerned about the impact of our lives.

That is what it means to change your heart and life. And it’s just a starting point.

Our job isn’t to endlessly debate Leviticus, Sodom & Gomorrah, Romans 1, 1 Corinthians, or any of the other “clobber passages” or “texts of terror.” Our calling is to help people change their hearts and lives. To move them toward action.

Even asking “how can you be LGBTQ and Christian?” is its own form of spiritual violence. Even when the question is asked with the best of intentions (and we all know that it usually isn’t). Your humanity should never be up for debate or discussion. It’s your life, not an academic exploration.

And frankly, it’s not even strategically effective.

Here is an alternative that I’ve seen bear good fruit in the lives and communities of queer people and skeptical, unaffirming Christians as well:

Next time you encounter someone who asks about the clobber passages, do this instead:

Now that you’ve stopped discussing the clobber passages or debating “is it a sin?”, it’s important to find something positive and proactive to do.

If you haven’t filled your life with faithful, queer experiences and stories, you might find yourself falling back into old habits, like I did that day on the picnic table with the Baptist preacher.

Our life as Christians isn’t to be defined as what we can’t have or can’t do. Instead, John quotes Jesus as saying “I have come that they may have life, and have it to the full.” What might an abundant life be full of?

If we don’t have some other positive way to respond, in times of stress or doubt, we’ll fall back on what we’ve always done. Even if endlessly analyzing the clobber passages isn’t ultimately effective or fulfilling, at least it’s familiar.

You need to learn to tell better stories.

Can you identify an area where your sexuality or gender has enriched or expanded your faith? Or that your faith has deepened your understanding of your gender, body, or sexuality?

If you want some help in figuring out positive, queer-affirming stories of faith to tell, we’re doing a 7-day  Instagram challenge to help you kickstart your own process of queering the Bible starting March 25. Signup here to participate for free.

In April, we’ll be hosting another round of Queering The Bible. Registration opens March 31. Add your name to the waitlist here.

Imagine what would happen if we all  — every single LGBTQ+ person — refused to debate our humanity ever again.

What if, instead, we took all of that time and energy and channeled it into queer brilliance. How might your life look different if your soul was that much lighter?

What art could be created?  What could we achieve through community organizing? Instead of a 6 week series discussing “is it ok to be LGBTQ,” your church instead hosted a 6 week book study reading Black fiction? What if instead of watching a documentary about a translation of one word, you watched Moonlight?

Or heck, what if you gardened or read in the park or Skyped with your grandmother (or your drag mother)?

Every moment spent arguing about Leviticus or Romans or 1 Corinthians with someone who has no intention to change their mind, is a moment not spent on yourself, or with people who want to truly learn about the fullness of queer life, or on supporting LGBTQ+ youth right now.

Earlier this year, someone on Twitter asked “How can I even have a conversation with someone who sees the world through completely different lenses?”

I replied, “You don’t. You change the world around them by talking w/ ppl who will listen & want to learn. Eventually, the communal change coaxes them along too. Or they never change but they’re less able to hurt others.

Like Jesus said: if they won’t listen, shake the dust off your sandals”

We have so much power and with just a little faith, we can move mountains. It all starts with shaking the dust off your sandals rather than staying stuck in fruitless conversations. The queer Gospel is truly God’s good news, let’s spread more of that!

Standing In My Power

Standing up for yourself is a form of justice work. I like to please people, I like to make people 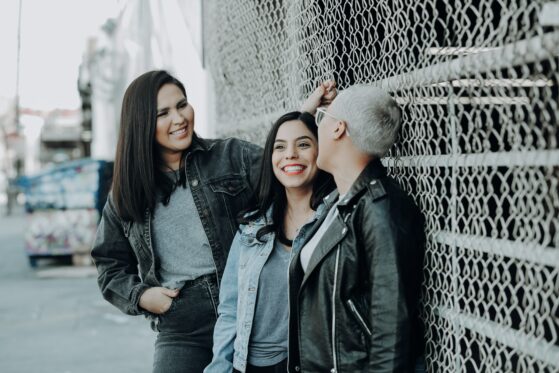 What I’ve Learned From My Polyamorous Friends

I am not polyamorous. As a pretty extreme introvert the thought of being polyamorous makes me feel exhausted. So when