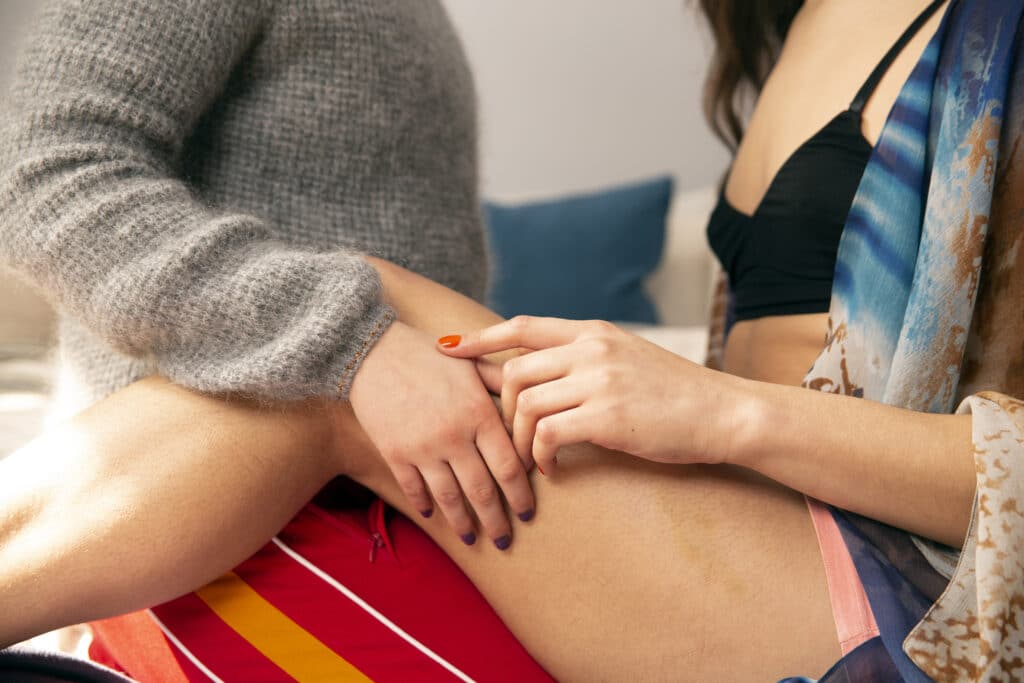 I grew up with purity rings and True Love Waits, with Rebecca St. James preaching that good, “stay pure” message. I heard how sex was dirty and sinful (until you were married), how our flesh was weak and would lead us astray. And as someone growing up in a trans body without language for my identity, it was easy to conflate my feelings of dysphoria with the messages of purity culture.

I tried to avoid thinking about my body as much as I could and I considered that holy. After all, we were to keep our mind on things above!

Later on, after I came out as queer I did a lot of work to unpack purity culture. I got more in touch with my body. I figured out some of my sexual ethics. I figured out what I believed was required of me from God in regard to my body. I thought I was done. I was at peace. I had it sorted.

But when I came out as trans, something else happened: I got a whole new set of negative body messages:

Everywhere I turned, from the queer community, to the straight world, to the church, told me that my body was unlovable. And because I had been primed by purity culture it was easy to let these new messages slide right in behind the old messages and put me back in a place of shame and misery. When someone treated me badly, instead of believing it was their issue, I took it on and said “Of course they think that. My body is unlovable.”

When my partner at the time no longer found me attractive, I thought, of course she doesn’t. I am unattractive. My trans identity makes me unlovable.

Purity culture and transphobia coalesced into a toxic stew of body negative messages.

Can you relate to this feeling? The feeling of internalizing harmful messages from the church, or media, or even family about your body?

I want you to think for just a moment about those messages that play on a loop in your head.

We repeat these messages because we heard them somewhere. Even if we hear them in our own voice, they didn’t come from within us, at least not at first.

‘We repeat negative messages because we heard them somewhere. Even if we hear them in our own voice, they didn’t come from within us, at least not at first.’

Once you identify where the voice comes from you can start to dismantle it. You can start to record other messages and voices over the negative ones.

Throughout the Scriptures, in both the Hebrew Bible and the Christian Scriptures, we see messages about the goodness of our bodies. Yes, really! From the creation story, to the raising of those in exile in the book of Ezekiel, to the concern expressed over and over again that bodies have enough to eat, that bodies not be oppressed, that bodies have a home.

In the Christian Scriptures we see a Jesus who walks in a human body. Who gets his hands dirty healing people, who provides for their physical needs. Jesus’ body is resurrected with scars and his body is still considered complete and perfect.

And even Paul; Paul who seems uncomfortable with bodies and sex calls our bodies a temple. By calling them a temple he is asking us to treat our bodies with care. To worship with our bodies, but also in our bodies. To consider our bodies as holy and good.

That is a hell of a different message than the one I got growing up!

It totally changes the way we relate to our bodies. Instead of seeing them as outside of us (we have a body.) we start to see ourselves as integrated with our bodies. We are spiritual beings in bodies. Our bodies and our spirits are joined. Which means every time we use our bodies we are engaging in spiritual acts.

Changing the way you think about our body means you can build a life giving relationship with your body. You can overcome the messages in your head.

While we can’t escape the culture we live in, while we will still hear transphobic messages and while some will try to bend us into purity culture, that doesn’t mean that we have to internalize those messages or believe them about ourselves. We can begin to rewrite the messages that we’ve been given into ones that are healthy and life-giving for us.

First we identify where the messages we’ve internalized come from.

Every time they come into our mind we name them for what they are: Something someone else told us. Name what the message is and who it came from.

Next we start to replace those old messages with new messages.

We reclaim the messages in our head with something new.

Finally we begin to walk in our new truth.

For example: I look in the mirror and I think “My trans body is unattractive.” I stop. I name that message as negative and that it came from my ex. Then I reclaim that message with this one: “Your body is loved and lovely.” If I interrupt those patterns enough times, then eventually the positive messages will come more often then the negative ones and I’ll start to think in a different way.

Every time we think something negative we name that that’s what’s happening, we name where it came from, then we reclaim it with a new message, and then we walk in our new truth.

Let’s dream for just a minute, shall we?

I want you to think for a moment:

More ease in our bodies means more ease with other’s in their bodies.

This is the first step in moving past shame and being able to connect with others, not just sexually, but in all intimate ways.

“More ease in our bodies means more ease with other’s in their bodies. This is the first step in moving past shame and being able to connect with others, not just sexually, but in all intimate ways.”

This is the future we are building in this moment of moving past shame and toward wholeness. Past negativity and into health. Past isolation and into connection.

Your body is a temple.

You are very good.

The Divine has created you in their image.

What a powerful, life giving message. Hold on to it. Embrace it. Believe it.

PrevPreviousA Subversive Christmas
NextIs your sex life out of whack because of COVID? Read this.Next

So here’s the thing about observing Holy Week; this whole thing should come with a huge spoiler alert. There is

8 Awesome Things Cisgender People Can Do