What the nativity can teach LGBT Christians

They returned to their country by another route.
– Matthew 2:12

I stood in the wind and rain on a two-lane road through a field in middle-of-nowhere Montana. The president of a Christian university walked to the school’s main gate and said cheerfully,

He then reminded me of the the school’s property line and that if I and my friends crossed it, we would be arrested.

“Would you reconsider our offer for a visit?” I asked.

“Could we just sit in the chapel out of the rain and talk with anyone who wanted to stop by?” my friend Jillian proposed.

“I really do have to get back,” and he turned and left. We never saw him again.

I stood in the driveway of the school with 20 other friends on the Soulforce Equality Ride, each of us holding an Easter lily and our favorite Bible verse. Mine was one that my sixth grade Sunday school teacher, Mr. McKinnon, taught me as a weekly memory verse,

“Love does no harm to a neighbor. Therefore love is the fulfillment of the law.”

I wrote it out by memory then as I did now, as I’ve always been able to do since committing it to memory in sixth grade. Love is not vague, not undefined, not fleeting. Love is specific. Love is an action. Love does no harm. And love is central to our life as Christians. 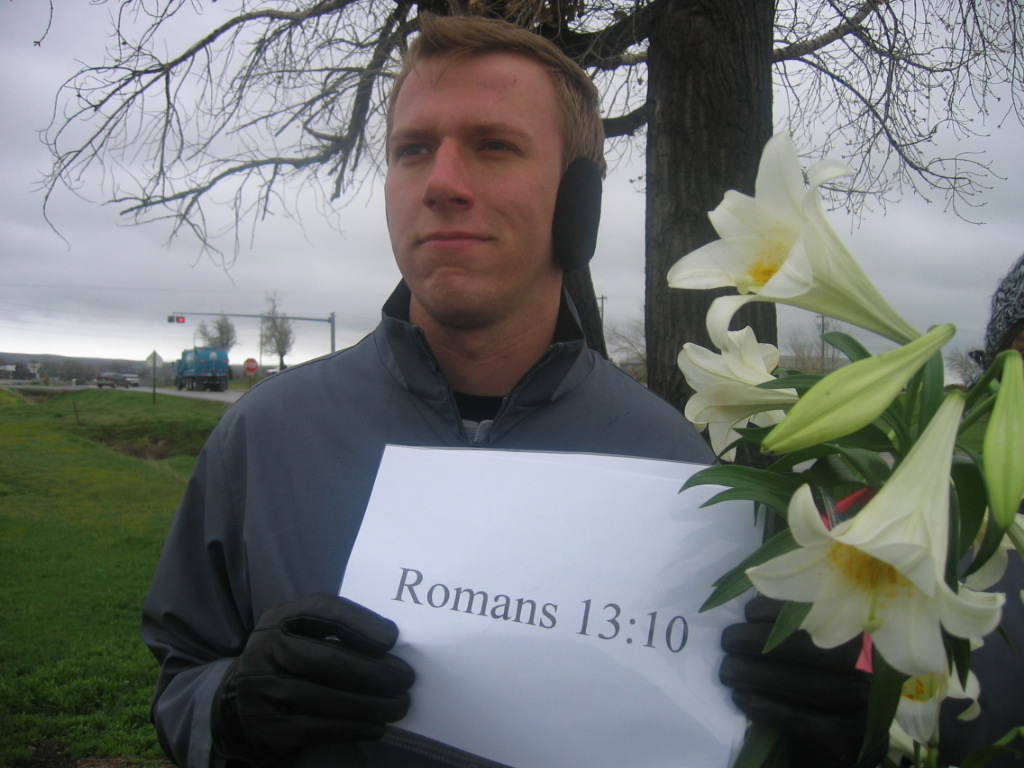 Another memory verse that Mr. McKinnon taught our Sunday school class was 2 Timothy 4:12,

“Do not let anyone look down on you because you are young, but set an example for believers in speech, in life, in love, in faith, and in purity”

I was here to set an example for believers.

I gave up two months of my life to travel back and forth across the country, visiting some of the most anti-LGBTQ institutions to start and support conversations on faith, sexuality, and gender. When I applied for the Equality Ride, I wasn’t really truly 100% for certain sure that it was OK to be gay. I just knew that something wasn’t right and I had this hunch that I could be a part of the solution.

The Equality Ride was supposed to be a break between college and the real world, a fun yet noble way to spend the spring semester since I graduated early. I had always planned to return to Los Angeles on May 1 and pick up my career in entertainment television.

My time on the side of the road in Montana is one of countless experiences that upended my world and everything I thought I knew. Not only did I realize that homophobia and transphobia was more entrenched, powerful, and pernicious than I had imagined (if you think “we just have to wait for the homophobes to die,” I invite you to visit Brigham Young University, or Patrick Henry College, or even Pepperdine University in idyllic Malibu, California), I also realized how much homophobia and transphobia had crept into my own life.

I thought I was going on the Equality Ride to change the conversation about faith & sexuality in America. No doubt we achieved that, coverage of our actions was in everything from the student newspaper to the local news station to MTV; a number of schools changed their policies for the better regarding LGBT people (some going as far as to remove all discrimination policies), and gay-straight alliances formed at most of the schools we visited.

But that wasn’t the biggest change.

I stood on that cold roadside outside of Yellowstone Baptist College for hours with the wind and the rain pounding on me and my friends, I spoke with a handful of students who braved the weather (and their administration) to come speak with us, and I offered a poncho to a woman who passed us by and was so moved that she stopped to stand with us for over an hour. And at the end of it I knew that I could not go back the way I came.

When I set out for the Equality Ride, I was inspired by Gandhi’s famous saying “You must be the change you wish to see in the world” and I thought he was talking about me going out into the world and doing activism, convincing others to accept LGBT people rather than waiting for someone else to do it. When the bus rolled into Minneapolis at the end of our two-month trip, I realized he meant something else.

You must be the change you wish to see in the world. You. You must change.

Perhaps your parents will accept you or your church will let you get married or maybe they won’t. But it begins—and ends—with you and with me.

After the Wise Men encountered the baby Jesus, they returned to their country by another route. That means that their time in the manger was only the halfway point. Half of their journey was still ahead.

So we had our manger moment. We are utterly and irreversibly changed. And we set out another way. What comes next?

Why we must talk about the politics of Jesus

Church and politics make uncomfortable bedfellows. At least that’s what we’ve been told, especially in the United States. There should

In 2019, Brian and I did three speaking gigs at various places in Minnesota. We spoke at a church, a