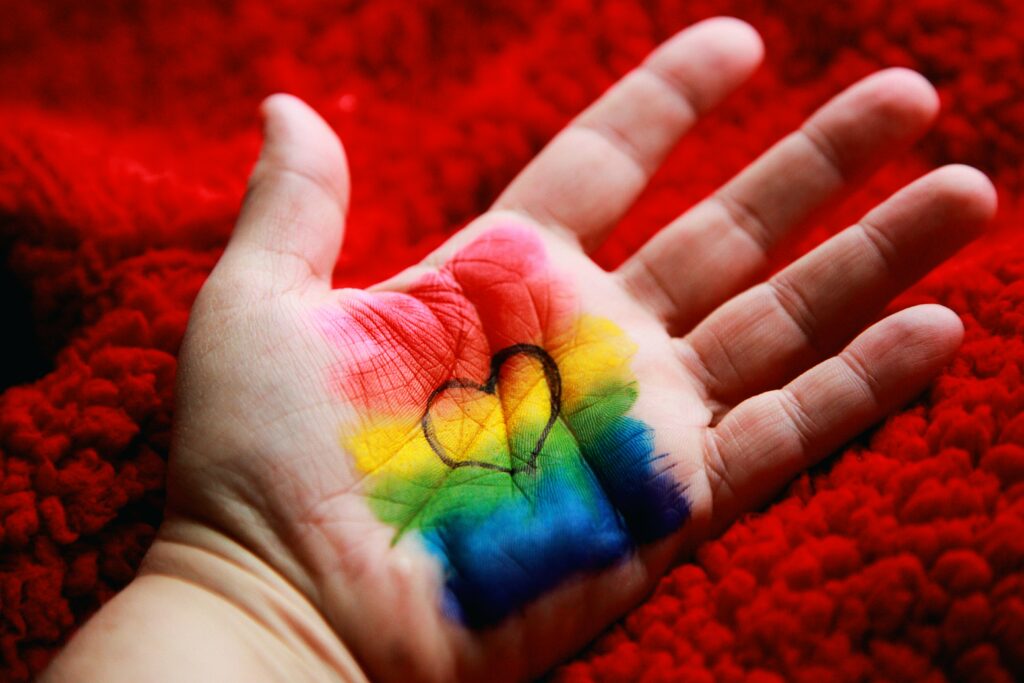 I know it feels like you need to be a walking LGBTQIA+ 101 seminar, but I promise you, you can put the teaching materials down for a while.

I had only recently come out and I was still trying to figure out how to tell the truth about my identity to people in my life who I knew couldn’t really understand.

I was still trying to find the language to explain it to myself.

It’s not like you figure out your identity and are handed a giant manual with talking points and a how to guide. And so I found myself in this weird position of having to advocate for myself and educate other people while still trying to figure it out for myself. It was exhausting and infuriating.

But I also felt like I could never say no.

I couldn’t say, “You know, I’m super exhausted today and just don’t have the bandwidth to answer your questions about transgender issues.”

Or, “I barely know you and I really don’t want to talk about what’s happening in my family as it relates to my transition.”

Or, “I know you’re trying, but you cannot continue to use the wrong pronouns for me.” I felt like to say any of those things, to refuse to educate someone, was not only rude but it would be a detriment to every transgender person in the world (and those yet to be born).

I’ve seen this happen over and over again when people come out. Maybe you feel the pressure, especially if you are remaining in your unaffirming church, or are the only out student in your Christian college, or are just one of the few queer or trans people that you know. You feel all of this pressure and responsibility to do all of the work. And more than that? You feel all of this pressure to be unfailingly nice. Because you don’t want to be the angry queer that you see on television or the internet. But more than anything you don’t want to be the reason that someone has a bad experience with a gay person and then goes on to hate gay people.

And maybe you use that as a reason to yell at other queer and trans folks who have been doing this work for a lot longer. You say we should be nicer and kinder and that it’s only through sweetness that we’ll win people over.

And I get it, I really really do.

I understand the thinking and the impulse. But this niceness? It’s a tool of oppression. It’s a way for oppressors to set the tone of the conversation and dismiss anyone who “steps out of line.” When oppressors use your rightful anger as a reason not to listen to you it allows them to pretend to take the “moral” high ground of dispassionate debate. But really, that’s just an excuse.

It is 2017. I would wager that even in the most conservative communities in the most rural parts of the country there is not a single person that doesn’t know someone who is gay. Even if it’s as distant as their brother’s third cousin. They know someone. (They might not know someone who is trans, that is a very real possibility, however even that doesn’t mean that you need to be the spokesperson for an entire people.) There are no lack of resources out there. There are books and DVDs and movies. There are lectures. There are things available in easy language, for free. Not just online, either. You can get them from libraries and mail order. And yes, of course, also online. What I’m saying is, it doesn’t all rest on your shoulders.

I know the responsibility you feel. I felt it too. I still feel it.

But what I have learned is that if you take the time to do your work once you’ve come out you can tap into a wealth of information and work that has been done by the people who have come out before you. In fact, I think this is one of the most important things that newly out people can do. Because, yes, you have every right to tell your own story in whatever way works for you. But often what happens is people who are unaffirming use you to rehash the same old conversations that people have been having for decades. They use your willingness to engage, they use your first steps in finding language for yourself, they use your newness to the community and to activism to vent their own frustrations and to keep the conversation stuck in one place. And because so many of us are getting to speak about our own lives for the first time we allow ourselves to be used and the work stalls out.

Here’s what I propose:

When you come out you should take the time to figure out what that means for yourself before you jump into the work of advocacy. Do our own deconstruction work. Figure out the language you want to use to describe and define your identity. Figure out where your boundaries are for what you will and will not talk about with unaffirming people. Figure out what you believe about God and the Bible and the church. Spend time with people who love you unconditionally and will give you the space to figure out who you are. Have some time meeting other queer and trans people who are farther along on the journey who you can learn from and from whom you can hear about the work that’s already being done.

I promise you, the work is still going to get done because there are people who have been out longer who are doing the work and will continue to do it. And it’s not your responsibility to educate people (whether they even want to be educated or not).

So take the pressure off of yourself. It’s not all on you. In fact, that is the biggest benefit of community: you don’t have to shoulder the burden alone. Take the time you need to get yourself steady. The work will still be there. And you’ll be much more equipped to do the work in a way that both honors yourself and moves the community forward. Your work (and your life) will be more sustainable because it will be built on a firm foundation where you are secure in your identity, where you have formed your language, and where you know that you are loved by God no matter what, and where you know what your boundaries are and have the strength to enforce those boundaries.

Take your time. Do your own work. Then come and join the community of people who are doing the larger work. But not until you’re ready.

11 years ago, I wrote an article that started with a quote from Fredrich Nietzche: God is dead.God remains dead.And