My Body Broken For You

In Luke 22:15-19 it says: When the time came, Jesus took his place at the table, and the apostles with him. “I have most earnestly wished,” he said, “to eat this Passover with you before I suffer. For I tell you that I will not eat it again, until it has had its fulfillment in the kingdom of God.” Then, on receiving a cup, after saying the thanksgiving, he said: “Take this and share it among you. For I tell you that I will not, after today, drink of the juice of the grape, until the kingdom of God has come.” Then Jesus took some bread, and, after saying the thanksgiving, broke it and gave to them, with the words: “This is my body.”

Originally I hadn’t planned on writing about the Last Supper. It isn’t that this part of the narrative is uninteresting or lacks meaning, but I just wasn’t sure how it applied to the trans experience. I couldn’t seem to find a corollary in my own journey. Then, I received an email that changed my thinking.

This is a well known scene in the narrative. It carries some of what I would wager are the most oft-spoken words in the Christian tradition. We call them the “words of institution” and they are recited every time we take communion. The words are so well known that they seem to lose their meaning. But let’s imagine we’re sitting in that room: we are the disciples, we are having Passover with our teacher and our friend. Things have been heated lately and we’re not sure what’s coming next. There is tension in the room. Judas is acting weird and we’re not sure what’s going on. Peter is being his usual blustery self, proclaiming that he’ll follow Jesus unto death. And Jesus keeps talking about how he’s going to suffer and die. It all seems like too much to handle.

Then they all sit down to have dinner. It’s like the ultimate television sitcom dinner. The dysfunctional family gathers for the Thanksgiving meal and secrets are revealed! There is fighting amongst the passing of the mashed potatoes. Then Jesus stands up. He takes this loaf of bread and breaks it in half and claims that it’s his body given for them. I’m sure some of them were thinking that maybe he’d lost it. I mean, bread as his body? And broken for them? What does that even mean? Even if they did believe he was going to suffer and die (which it seems like they still weren’t buying), how would it be for them? For the political movement maybe, but for them? And really how would his death help anything? If he died then that’s it. He’d be dead and they’d be left alone and nothing would change. So what’s all of this talk about being broken for them?

Then he raises a glass and says that the wine is his blood. It’s poured out for them and is part of a new covenant. More weird talk. A covenant they could understand; covenants were a part of their community life. Maybe even blood being poured out makes sense, but the blood of an animal, not a person.

The text doesn’t give us a lot to go on. This scene happens and then the story quickly moves on. For such a large rite of the church it doesn’t get a lot of airtime. We get more of the story in Paul’s letters, but by that time it was already a rite of the church. What about this small scene captivated the early church enough to make it a part of their regular worship? And how in the world does this relate to the experience of transition?

We come back to the email: I have a little sister. When she was eleven my mom sent me an email saying that my little sister’s class was writing an “operetta” on heroes and she chose me as her hero. Now, my mom hasn’t told my sister about my transition, but my sister has seen me since I started transition, we talk on the phone. In a lot of ways I know that she gets it even without being told. She might not have the language but she has seen me undergo transition. I am still her sibling and she claims me as her hero. I realized that in some ways I transitioned for her.

As her older sibling, I want my sister to be happy in the world. I want her to be at peace in her own skin. I want her to wake up in the morning, look in the mirror, and love who she sees. I want her to walk through the world with her head held high. I want her to be her most authentic self at all times. How could I possibly inspire her to be herself if I wasn’t being myself? If every time I looked in the mirror I hated the person I saw staring back at me? If I continued to walk with my shoulders rounded in order to hide my chest? If, once I started transitioning, I avoided coming home to see my family because I didn’t want them to know about me? How could I possibly be an example to her if I hated myself and was ashamed of my life?

Jesus knew that even after he died he would be remembered and carried on in the lives of the people who loved him. He knew that living the life he was called to, even if it meant death, was a better example for the people he loved than playing it safe and living unscathed.

That is the legacy I want my siblings to have. To know that a life lived truly, authentically, bodily is a life well lived. I want them to know that to follow your heart, to follow your gut, even if it leads you to scary places is worth it. I want them to know that no matter who they are they will be held in my embrace and loved. So I broke my body for them, so that I could show them that even with scars you can be okay. To be wholly yourself, living wholly in your body is a holy endeavor.

PrevPreviousPalm Sunday: What happened and what does it MEAN
NextGood? FridayNext

Would you like to accept Jesus as your personal Lord and savior? It’s a question we hear on street corners, 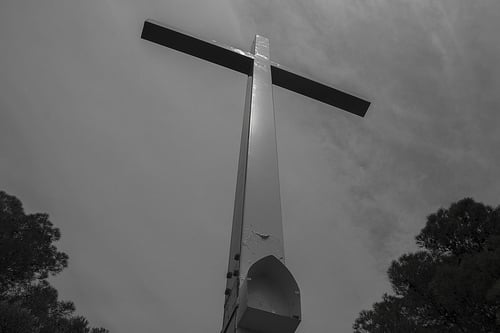 The other day I strolled through the Minneapolis Institute of Art. I love this museum for several reasons: it’s always