The Sin of Pride 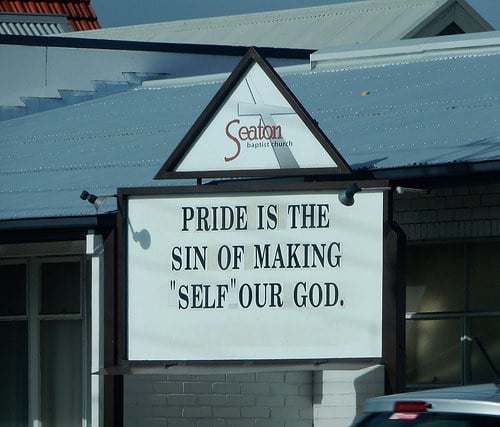 We were told it in slogans “Joy means Jesus, Others, You.” Or the popular one of recent years, “I’m second.”

Self-denial was the best way to be a good Christian. Do whatever God wants you to do. Give up your own desires. If you’re good at something and love doing it it’s probably a test to see if you’re willing to give it up. So best just to give it up so God will get the glory.

So it was pretty complicated when I came out and there was this whole movement about being “proud” of your identity. Good Christians aren’t allowed to be proud.

And of course, that’s what the anti-gay folks will harp on: Look at these homosexuals being PROUD of their sin! They are flaunting their identity! They are proud to spit in the face of God!

What I came to realize is the opposite of pride isn’t humility, it’s shame.

But people who have a healthy sense of self, who can stand in their own identity especially in the face of hatred, those people are dangerous. Those people fight to protect themselves and their communities. Those people feel that they are deserving of rights. Those people will unite and work to get those rights. You can see why this terrifies the oppressors. Because when people claim their space in the world, suddenly the oppressor feels their hold slipping a little bit. When queer and trans folks walk through the streets proclaiming their identity; that they and their bodies and their desires are good, the people who are afraid of that get a little more afraid because they see their power slipping. They see that queer and trans folks aren’t just going to go away. They aren’t going to hide anymore. They aren’t going to allow themselves to be sent to conversion camps or hide their relationships or not transition.

When people stand up and say “We will no longer be humiliated” this isn’t a sin. Itâ’s actually fulfilling what Jesus said his mission was: “That they will have abundant life.” When queer and trans people say that we are proud of who we are we are claiming that abundant life and living it to the full.

So go out there and be proud. Claim your identity. Live into the fullness of the gifts that God has given you. This isn’t a sin, it’s salvation.

Did you know you can support my work on Patreon?

PrevPreviousLGBT Christian Respectability Politics Have Got To Go
NextGrief and Resurrection: A Sermon for Transgender Day of RemembranceNext

Coming down from the Pride “high”

Pre.S. I adapted this from a video I made over on our Facebook… I’ll embed that at the end of

It’s time for the 6th annual Queer Theology Synchroblog! (that’s right, we’ve been doing this since before queertheology.com was born!).