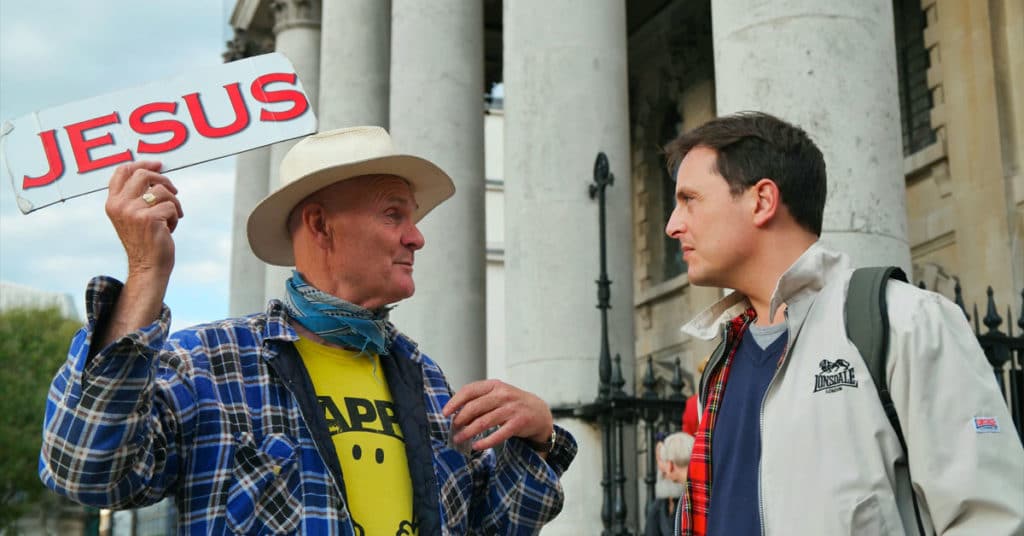 Would you like to accept Jesus as your personal Lord and savior?

It’s a question we hear on street corners, from televangelists, and even (or especially) at Christian summer camps and Vacation Bible Schools.

For many Christians, saying a prayer and “asking Jesus into your heart” is the defining moment in the Christian faith.

In fact, I used to think so. Now? Bullshit.

Jesus didn’t ask his followers to accept him into their hearts; he asked his would-be disciples to leave their nets and follow him — to leave everything behind to follow him in his ministry.

Well he lays it out explicitly in Luke 4,

The Spirit of the Lord is upon me,
because the Lord has anointed me.
He has sent me to preach good news to the poor,
to proclaim release to the prisoners
and recovery of sight to the blind,
to liberate the oppressed,
and to proclaim the year of the Lord’s favor

And this is why LGBTQ people — and poor people, and people of color, and immigrants, and prisoners, and other marginalized people — are so vital to the conversation of faith…. because Jesus was clearly, explicitly, purposefully here for us.

LGBTQ people — and Black & Latino Americans — are disproportionately targeted by the police & prison systems. Jesus’s message to release the prisoners and liberate the oppressed is Good News for us.

People with disabilities—or even those who are just sick, or living with a chronic condition such as HIV—deal not just with physical symptoms but social stigma from a society that doesn’t care to understand. Jesus’s message is Good News for us.

Anyone living under oppression—immigrants who are exploited by employers, queer children who are repressed by their parents, women navigating sexual harassment in both public and private spaces, Jewish people suffering under the constant pressure of anti-semitism, Palestinians living under occupation—Jesus’s message to liberate the oppressed is Good News for us.

While Jesus does tell the criminal executed on the cross next to him that “today you will be with me paradise,” he also teaches us to pray for God’s kingdom “on earth as it is in heaven”.

We see in Jesus a messiah who prays privately and then heals publicly, challenges authority publicly, turns over tables publicly.

Christians proclaim that God is incarnate in Christ. That matters. That God dwells in a human body. That it’s not all about “getting into heaven” but instead that the here and now matters to God… so much that God entered right into the messy here and now.

So what do we do about that age old question, “have you accepted Jesus as your personal Lord and savior?”

You know what, I do accept Jesus as Lord. In saying “Jesus is Lord,” I’m saying that Cesar is not, that Donald Trump (or Barack Obama, for that matter) is not. I’m saying instead that God is uniquely present in a homeless Middle Eastern itinerant preacher living under occupation. I’m saying that the divine is in the margins.

Much of the Christian church has lost sight of the Jesus we see so clearly in Scripture. LGBTQ Christians have a critical role to play in reminding the Church about the good news of Jesus.

Our faith isn’t something that we can pay lip-service to because it is tested and questioned daily. It’s something we’ve had to cling to and fight for.

Our faith isn’t some thought exercise, it’s one we grapple with daily.

LGBTQ Christians don’t need to ask to be let into unaffirming churches — God is already in our midst. (tweet it!)

Queering theology isn’t about distorting Scripture, bending it to “justify our sin” — instead, it’s seeing what has always been there and orienting our life to follow God’s call.

Christ asks you not to accept him, but to follow him… what’s your reply?

P.S. If you want some concrete actions you can …

When I was coming out, I did what seems to be the typical former evangelical process: I read every book