When you really believe something, it changes everything

This article was originally published in Issue 1 FAITH (DOUBT) of Spit & Spirit. You can get the whole issue for free here.

My middle school youth group leader Dave O’Connell asked, “If you believe something but it doesn’t change your life, do you really believe it?” Ever since, that question has anchored my beliefs to my actions.

In middle school, I believed that Jesus had died to pay for my sins, to save me from the punishment and torture of hell. I believed that anyone who didn’t accept him into their heart and turn their life over to him would suffer an eternity of torment. And so, with that belief firmly intact, I set about witnessing to as many friends as I could.

I invited them to youth group, summer camp, the fun church activities, and even Bible study and Sunday school. I didn’t want anything bad to happen to them. I wanted them to be saved too.

As I grew older, I became more and more aware of my attraction to other guys and felt more and more out of place at my church. Still, in eleventh grade when I fell in love with my best friend, I didn’t hesitate to invite him to YoungLife camp. He, surprisingly, agreed to come.

Over the week at camp, he accepted Jesus into his heart and turned his life over to Christ. He also made new friends from our school at camp and over the rest of the summer, our friendship drifted.

I remember thinking that even though YoungLife camp triggered the beginning of the end of our friendship, if I had to do it again, I would still invite him. I loved and cared for him that much — enough to lose him to save him.

High school ended and over the following few years, I let go of more and more of my Evangelical beliefs. I still wanted to believe them, to hold them near me—they were comforting and familiar — but I noticed that I wasn’t living them out. I couldn’t really claim to believe in them.

“If anyone is in Christ he is a new creation; the old has gone, the new has come.”
2 Corinthians 5:17

2 Corinthians 5:17 was one of my memory verses in sixth grade.“If anyone is in Christ he is a new creation; the old has gone, the new has come.” I can still recite it from memory. But I didn’t really understand it, I’d never lived it.

From my evangelical perspective, being a new creation meant that I’d thrown off the shackles of Original Sin, I now had Jesus as my co-pilot and would be better equipped to make the “right” decisions, and I was pardoned for any of the bad things I’d done up until that point.

It was all very academic, some theoretical tabulation happening in Heaven. I didn’t feel like a new creation. I felt deeply emotionally and spiritually moved during worship, and especially during the talks and prayer times at camp. But my day-to-day existence was rather ordinary.

In March 2007 I was on-campus at the University of Notre Dame when a student there asked for more information about our group, Soulforce, and the activities we’d planned for our Equality Ride stop. I explained we were traveling the country starting conversations about faith, sexuality, and gender. I handed him a flyer detailing our events for the coming days.

And I was promptly confronted by security.

I was cited for trespassing, had my name and personal information recorded, was escorted from the campus, and was banned for life from any property owned by the university.

Two days later, when our bus pulled away that student, Daniel, sent me an email. He had attended all of our events after meeting me that day on campus. In his email he explained that he is gay and that our visit gave him the comfort and affirmation he needed to finally love himself. He got the courage to begin telling his friends and he returned to church for the first time in months. I was born again.

A teacher at my church in New York City describes the Christmas story this way:

When the wise men encountered Jesus, they experienced something so profound that they could not go back the way they came. Instead, they left a different way, forever changed.

My encounter with Daniel would be echoed over and over again in experiences since fully embracing myself and slowly, tentatively stepping into activism and advocacy.

At some point, I could not return the same way.

When the wise men encountered Jesus, they experienced something so profound that they could not go back the way they came. Instead, they left a different way, forever changed.

The queer experience, like the Christian faith, is an invitation to return a different way, to enter into a story bigger than oneself, and to allow the experience to transform you.

I am thankful to be queer. When well-meaning Christians ask, “I mean who would CHOOSE to be gay?” as their justification for being LGBT-affirming, I bristle.

I would choose to be gay.

My experiences because of my sexual orientation profoundly shaped (and continue to shape) my life. They helped me to question my previously unquestioned beliefs. They brought me into contact with diverse people and opinions.

And, perhaps most strikingly, they guided me deeper into the Christian faith. I look back now at my middle school faith and realize that it was childish. I was so concerned with 15-minute “quiet times” each morning (that I could never manage to keep up with). I insisted that Noah’s Ark was real and that men had one less rib than women. I refused to understand evolution. And of course, I thought it was a sin to be gay.

Today, my adult faith—triggered by being queer—has transformed my life. It peels off layer after layer of the old creation.

Faith has the power to enact real, measurable differences in the world. But not in a magical way. Faith is powerful only when it is transformative. Only, as Dave O’Connell insisted, when it changes you.

Now, this is what I believe:

I believe that just as Jesus was incarnate in humanity to demonstrate the power of love, so too must I incarnate my love for others. It’s not enough to say “I love you,” I must act out that love. Even when it’s uncomfortable. Even if it means I might be crucified.

I believe that God is in the margins. That just as Jesus was a homeless, itinerant peasant born to a single teenage mother in exile, God still dwells in the shadow of the Empire. That I have something to learn from a God who continues to be in my midst in the lives of those I encounter every day.

I believe that Sin is real and pernicious and evil. I see it more now than ever before—in the torture of innocents in the name of military might, in the economic injustice which causes my country to have more empty homes than homeless people, in the horrible conditions in which my electronics were produced. Sin is real and ever-present and seemingly inescapable.

I also believe — absolutely believe — that healing and reconciliation are possible because I’ve experienced them in my own life.

Today, I have been transformed into a new creation. And it’s all because I’m queer.

This article was originally published in Issue 1 FAITH (DOUBT) of Spit & Spirit. You can get the whole issue for free here.

“But if we accept homosexuality, what then? It will be anything goes.” The Bible (as interpreted by a certain type 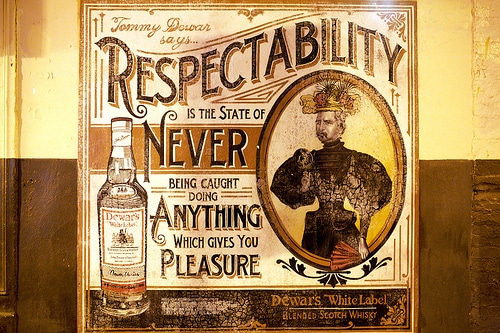 LGBT Christian Respectability Politics Have Got To Go