I was 24 when I went to my first Pride celebration. I went to the one in Toronto and it was massive. Over a million people swarm the city for a week of events and celebrations culminating in a huge parade.

I was just starting to inch out of the closet. For a couple of years I had known myself to be gay (I still had no language for my gender discomfort) but I was in a situation where I couldn’t be very open about that identity. I was working as a youth pastor at a Baptist church and still living at home with my very conservative mother.

But over the previous several months I had met a woman who became my first girlfriend. She invited me to come to Pride with her before we were dating, though by the time the event rolled around we had begun our relationship.

I felt very isolated in my queerness. I didn’t have a lot of people to talk to about it and even though I was visibly gender queer I still felt mostly invisible in my life. I felt like I was constantly censoring the things that I talked about, trying to make sure that I didn’t sound “too gay.” I didn’t talk about certain TV shows or musicians. I didn’t talk about politics. I just tried to get through every day. But the silence was taking its toll on me.

I was depressed and unhealthy. Even though I was dating someone, I was still in the closet and that closet was killing me. I had a lot of good reasons for not coming out, but living that kind of life has serious impacts on a person.

I wasn’t sure what to expect at Pride. But as we entered into the city and saw the rainbow flags, I felt a sense of excitement. Everywhere we went that week we were able to be open about who we were. We were able to hold hands and dance. We were able to be together in public without looking over our shoulders or worrying we would run into someone I knew.

Throughout the week strangers would call out “Happy Pride” as we passed them on the street. It was like everywhere we went we were a part of a huge community of people. As someone who had felt so isolated, this was beautiful and affirming.

I felt seen. I felt acknowledged. I felt like I could be myself.

And once I had experienced that it was a lot harder to go back into the closet when I got back home.

That’s the thing about freedom: once you taste it you can’t get enough of it. Once you are seen for who you really are, no hiding, no lying, you realize how much you’ve been longing for it. It wasn’t long until my closet fell apart. There was a cost, for sure; I left my job at the church, the tension in my family rose, I found myself floundering and scared. But I was also free. I could be who I was. And that made all of the difference.

But I urge you to find a way to get yourself into a place where you can be all of yourself this month. Whether it’s attending a Pride celebration, Skype-ing with a queer friend from another place, going to an affirming church where you can be who you are, telling the truth about yourself to someone you trust, or simply getting away by yourself and acknowledging the goodness of your queerness in the quiet of your own heart; do something this month to celebrate your identity. Do something to honor the truth about who you are.

Sanctuary Collective is a lot like Pride—it’s full of amazing, supportive, loving LGBTQ+ people from around the world ready to welcome, embrace, and support you. It’s also full of incredibly useful resources like how to read the Bible queerly, an LGBTQ Christian Guide to Self Care, and more! We’d love to have you join us. Learn more!

PrevPreviousWhy are there so many naked people at Pride?
NextComing down from the Pride “high”Next 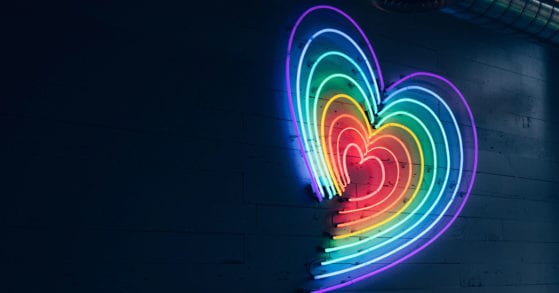 The Bible, Monogamy, and Polyamory

8 Awesome Things Cisgender People Can Do