How queering the Bible enriched my faith 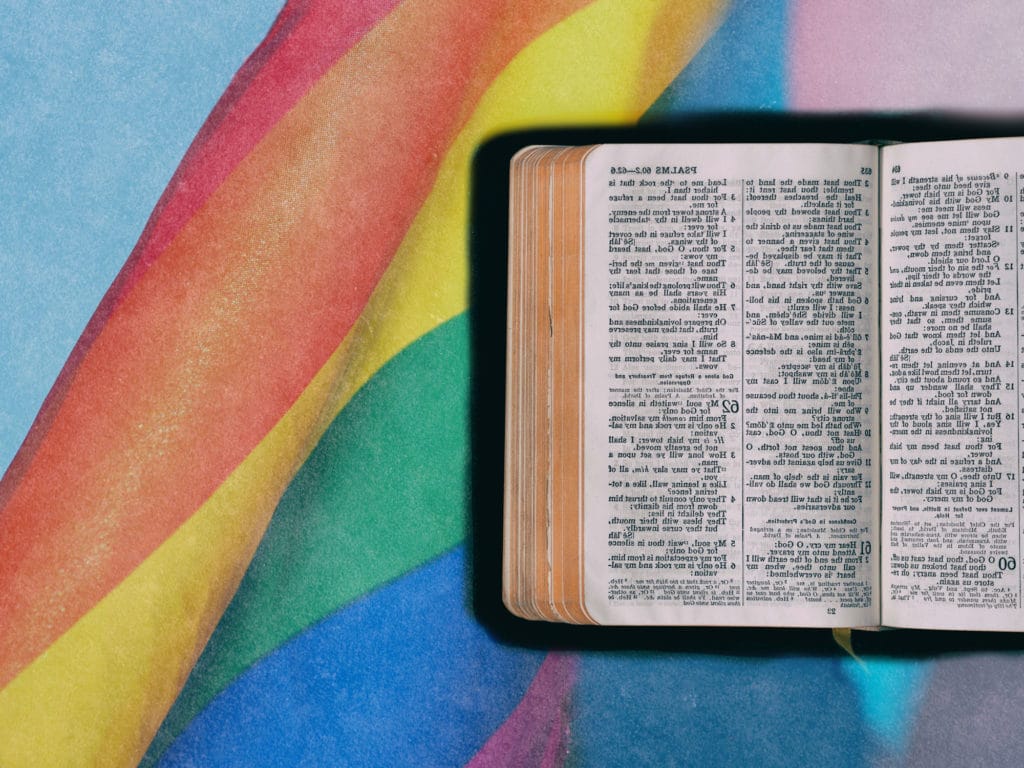 I have this habit from the early days of my Christian faith that I can’t quite shake: I usually want to turn to the Bible for a quote to go along with whatever theological topic I’m thinking about.

That’s an understandable impulse: the Bible is a central document in our faith and practice as Christians.

The problem, a problem, is that this method of plucking a Bible passage right off the page, ignoring meaningful context, and then using it to “prove” your point has long been abused by Christians to justify or condemn whatever fits their need. I wrote a whole article about how this habit — prooftexting, it’s called — has been used (improperly and unfaithfully, IMHO) as a bludgeon against LGBTQ people. You can check it out here: Is it REALLY ok to be LGBTQ and Christian?

So that’s not what we do here at QueerTheology.com. Rather, we work to engage the whole of scripture; combine that with everything we know about the religious, political, and historical context of the time it was written; look at the way it’s been understood by other Christians throughout the ages and around the world; and examine even (especially!) how it speaks to our current context.

If Christianity is to be a living faith, what does it say about our actual lives, right here and now?!

That might sound like a lot of work but (a) it’s totally worth it and (b) we’ve figured out how to break it down to make it more manageable for you. Keep reading to find out the why of the former and and the how of the latter.

At the same time, I’m aware that there’s something deeply comforting about having memorable quotes you can turn to for advice or inspiration. Heck, we send out short quotes/lyrics/Bible verses every single weekday morning! The problem arises when we think that our particular understanding of a verse or passage is the only possible “correct” one. When our prejudices become calcified in “orthodox theology,” “proper exegesis,” “faithful hermeneutics.”

Over the past 13 years, though, I realized something remarkable: God is not found in small boxes or simple answers.

Here’s what I learned, how I learned it, and my invitation to you to dive deeper into exploring the richness that a queer understanding of the Bible can bring to your faith and life.

At some point in my mid-teenage years, I began to realize that I liked guys. Like, “liked them, liked them.” I started to figure out that I might be gay or bisexual but I didn’t quite know what to do with that, so I set out to figure out what the Bible said about it. What started out as solo bedroom Bible study eventually turned into studying religion in college.

That’s when the first crack appeared.

I was a freshman at the University of Southern California and had chosen “Reading Scripture as a Skeptic and Believer” to fulfill one of my general education requirements.

There’s the historical truth of what did or did happen thousands of years ago in the Egyptian desert and of that we can be reasonably certain. There’s no mention of a mass exodus of slaves in any Egyptian writing, there’s no archeological evidence to suggest an entire nation had setup camp for decades. It just didn’t happen.

But then there’s the Truth of it

That, as an Orthodox rabbi told my gay friend over a Passover seder, “With a mighty hand and an outstretched arm, God will schlep you out of your own personal Egypt.”

That God is forever on the side of the disposed and disenfranchised. That God will free the slaves even if it means sending plagues to the oppressors. That when you’ve hit the end of the road, when an army has you up against a wall (or a river), God will make a way. That the impossible is possible.

I wondered, if the Bible isn’t true then why should I believe it and how can I be a Christian? It took me years to ask the question: are my beliefs about truth true?

My whole faith began to fall apart. I stopped going to church, I stopped reading my Bible, I stopped thinking about Christianity (as much as I could: Christianity—or my limited understanding of it— would still come rushing back in the form of unexpected shame wayyyy too often).

I spent 2 months in intense, nonviolent direct action confronting anti-LGBTQ Christianity in some of the most queerphobic Christian campuses in the country.

I began experiencing the faith I’d grown up simply hearing about.

I stood in the wind and rain on a two-lane road through a field in middle-of-nowhere Montana to “be an example for believers” (2 Timothy 4:12) and I UNDERSTOOD in my bones what it meant to “offer your body as a living sacrifice” (Romans 12:1). Like, I could literally feel it in my bones because I was so cold and wet.

I took that experience with me and continued the work of queer activism in my local community.

My queer community in New York City embodied the church in Acts — where “there were no needy persons among them” — in a more real way than I have ever seen before. We replaced Leo’s clothes when he was mugged, we chipped in for Micah’s surgery, we supported Asher’s business.

My faith is no longer theoretical. It’s no longer what I’m supposed to believe. It’s something I can walk around inside of. That has flesh and bones and faces and hearts. The spirit of the Divine pulses in us all.

One piece at a time, I began to rediscover my faith.

The more I looked, the more connections I found. Paying attention to my queerness and connecting that with Christianity helped me to rediscover my faith one story, one lesson, one ritual at a time. Bible stories that I grew up listening to, theological ideas that I’d been taught about, all started coming ALIVE for me when I infused them with queerness.

I listened to and learned from my transgender friends and was enriched by their experiences too. Queerness has something to teach us outside of our own experiences, too. The Gospel is bigger than any one of us. We need each other in order to see our faith fully.

Fr. Shay blew my mind the first time I heard him preach about Ezekiel and the importance of flesh and bodies. A few weeks ago, we recorded a video of him talking about the story of Doubting Thomas and Jesus’s scars and what that meant to him as a transgender man and he left me with goosebumps (literally). We’re releasing that on Transgender Day of Visibility next week; subscribe to our YouTube and/or “like” us on Facebook to make sure you see it.

This process of finding connections between my life, the pressing issues of our day, and the Bible is a key part of what it means to be a faithful Christian.

A connection between my head and my heart, between the text and the present, even between sacred and the sexual, has been ELECTRIC.

As a result of queering the Bible (rather than forever debating the same 7 “clobber passages”), my faith is ALIVE. I’ve put childish things behind me, as the writer of 1 Corinthians also did. I GET IT. Because I have seen, tasted, experienced, embodied a faith that used to feel dry, theoretical, performative, prescriptive, and put on.

I feel more confident. I know what I believe inside and out (and I truly believe it, I’m not just repeating what I’m “supposed” to believe)

My relationships are flourishing. I have built a community and a chosen family that supports each other.

I am living out my faith in real, tangible, visible ways that are truly good news to the world

When we queer Christianity, we uncover something that is both new and ancient.

Queerness shines a new light on the Bible and helps us to see the text in new ways … but also, at the same time, helps us to understand the original message even more fully. Christianity has always been queer!

When we do this, we acknowledge that there are many ways to understand any given passage, even many different ways to queer the same passage. That’s so fundmentally queer, isn’t it? Queerness is big and beautiful and diverse. There are countless ways to be queer and in the same way, there are ever more ways to queer the Bible and to discover new, profound (and prophetic) meaning. Queerness leads us into a Christian faith that is ever deepening and always refining.

What does queerness have to teach you?

Jesus said, “I am come that they might have life, and have it in abundance.” That abundant is available to you too and I believe — I have seen! — that queerness is at the heart of it.

Fr. Shay and I have spent a combined 30 years (OMG! We old!) figuring this out. He spent 3 years in seminary (and is still paying off that debt) and I spent a decade putting my body on the front lines of LGBTQ justice, training under civil rights leaders, and studying the intersections of religion and activism. We want to share some of that goodness with you and teach you how to uncover what your own queerness has to teach you about the Bible!

We’ve got two ways to do that:

First, participate in our 7-day Queering the Bible photo challenge on Instagram. All the details are at queertheology.com/challenge

Second, add your name to the waitlist for our Queer The Bible course so that you can be sure to grab a spot (and snag a discount). Interested? Pop over to queertheology.com/queerbible

Got questions? Drop us a line and let us know what’s holding you back, we’re here for you!

When I was coming out, I did what seems to be the typical former evangelical process: I read every book

What Does It Mean To Be A Christian?

Growing up, being a Christian was simple. You believed… that you were a sinner, that because of your sin you