What To Do With Shame, Sex, and Jesus 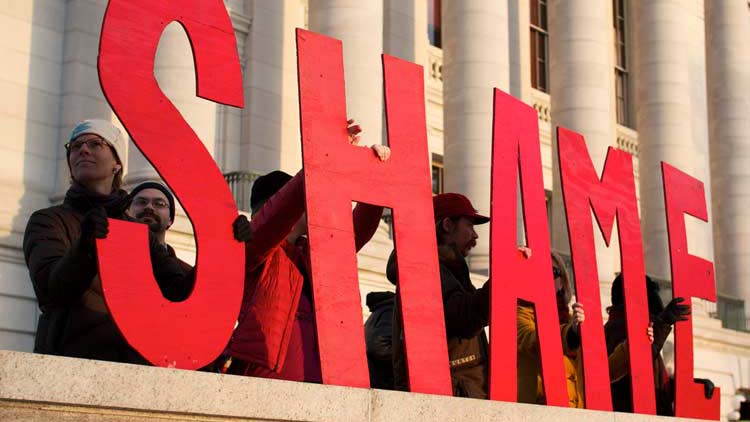 My entire life every message I received about sex was that it was simultaneously incredibly dirty and disgusting AND somehow also something holy and pure?

The first step in creating a healthy relationship with sex and your body is figuring out how to let go of shame.

Don’t have sex before you’re married. If you ask “how far is too far” you’ve probably already gone too far. Don’t be gay. Don’t kiss too much. Be careful about being alone with someone you’re dating. God is watching and God wants you to be holy.

Those were the messages I received around sex and sexuality. My “education” (if you can even call it that) centered around what not to do. Even though, honestly, I didn’t even understand things enough to know what I was being told to keep away from.

I remember thinking that oral sex was talking sexually on the phone.

My entire life every message I received about sex was that it was simultaneously incredibly dirty and disgusting and also something holy and pure that we should save for our heterosexual spouse.

That timeline meant falling for the first person you dated, dating them for a very short time, and then getting married with zero option for divorce.

Does that work sometimes? Yup. Does it work even most of the time? I don’t think it does. Even at my super conservative college we saw the same divorce rates as the “secular” world. Yet those rates were always blamed on people not following Jesus in the right way.

What I have come to believe and experience is that the evangelical church profoundly and damagingly gets sex and relationships wrong. Not just for queer people but for everyone. And like I said last month, the joy of being queer is that you are freed up to figure things out for yourself.

The question isn’t “when and how am I allowed to have sex?”

What the Bible does help us to understand is that God is concerned with justice. Which means that God wants women to be able to have control over their own bodies. God wants consent. God wants transgender people to have access to health care. God wants people to not be dependent on a partner for their financial well-being. God wants the ending of relationships where a partner is cruel or abusive or harmful.

And yet what does the church often boil all of that down to? Don’t have sex.

This obsession with bodies is all about control.

It’s about control of women, of queer and trans folks, of marginalized people. It’s a way of keeping us in our place and it’s a complete bastardization of the Gospel.

Even in the anti-sex writings of Paul what we see isn’t him trying to establish new rules for forever and ever, he was trying to make sure that Christian communities were equitable. That women were treated well and had some power. (Even though Paul also got it wrong sometimes like when he said women should be silent in church or when he said no one should have sex ever because Jesus was coming back really really soon.)

So what should we be asking?

For me, the first question is always: What is damaging that you need to let go of? Quickly followed by the next: What’s helpful?

What is damaging? Shame filled injunctions against sex. Body shaming messages. Messages that say that sexuality and bodies are dirty and gross and something to be put up with but that really it’d all be better if we were just disembodied souls. Rules around sexuality that bear little resemblance to the way life actually works.

What is helpful? A sexuality that is in line with the biblical values of respect, justice, community care, and concern for the most marginalized.

How does that play out in my life? I make sure that my relationships are founded and centered on respect, consent, and communication. I value my body by caring for it with testosterone shots and other medications that I need. I work to erase my shame over my scars and see them not as wounds but as holy. I treat my partner and her body with respect and reverence. I take pleasure in her pleasure and make sure that she feels safe and that she experiences pleasure. I release the shame I’ve been made to feel over being a sexual being.

How do I do that? With patience, with gentleness, with time. I check in with my body about what feels good and what doesn’t. I take the time to be clear with myself about what I value and how my sexuality fits into those values. I talk to my partner about how we interact with one another. I pray. I investigate areas in my life where I might be living out of balance with the values of respect and justice.

This isn’t about trading one set of rules for another. It’s about interrogating the whole system and putting into place a way of living and being that is life-giving and healthy.

A Strange Baptism: Sermon on the Ethiopian Eunuch

Acts of the Apostles 8: 26-40 Then an angel of the Lord said to Philip, ‘Get up and go towards